Amazing stationery store Kikki.K wrote this great little blog post earlier in the week about finding new angles with your camera. Their examples taught me a brilliant lesson (yes, yes, photo bods, I know it's entry level but some people don't know these things 'kay?). The thing you're photographing doesn't need to be entirely in the frame, or even entirely in focus. It may be just enough to just suggest the form of an object, allowing your eyes to focus on the smaller details.

And so I thought I'd give it a go this morning for p52, "details". I'll need to practice a bit, but it was fun.


I feel so pleased to have a "proper" camera these days, even though it's not quite the DSLR of my dreams. Manual functions are so rewarding, and auto functions are so often uniquely disappointing. I love it. If anyone's nervous of their manual functions, don't be, look what they do, even for a duffer like me.


UPDATE: Blogger doesn't seem to be allowing me to leave comments on any p52-ers' posts. I am looking at them and I am loving them - just sorry I can't let you know. (Anyone else having the same problem? Mind you, if you are, you probably can't leave a comment to tell me that. Hmmm.)

You might think that vowing never to sit exams again (early twenties) and quitting the rat race (late twenties) would rid a life of deadlines... not so, they're still there, they're just significantly more pleasurable.


I've got 48 hours before we leave for my Granny's eightieth birthday, and unfortunately I can't knit in the passenger seat, so the heat is really on with her gift. And at last I managed to get my hands on my book group's choice for this month (When God was a Rabbit by Sarah Winman) - it's the first time I can go to book group for two years, so I really should be sure to finish it. Luckily it's proving quite a quick, enjoyable read but I'm only half way through and, from the reviews I've read, I know I need to digest the second half before forming an opinion on it.

I'm feeling really quite smug about my low-pressure covetable deadlines. You can probably tell. Obviously I'm putting aside the tax problems that I have no idea how to solve, tediously urgent change of address letters, and medical waiting lists that must be joined - they'll need to wait for another day. Yarning Along with Ginny. 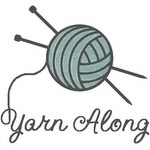 Email ThisBlogThis!Share to TwitterShare to FacebookShare to Pinterest
Labels: knitting, yarn along

I am defiantly, sinfully lazy. A bone-idle, work-shy sloth. But one thing is guaranteed to motivate me: hunger. Specifically, a hunger to feed people things that I've grown myself. 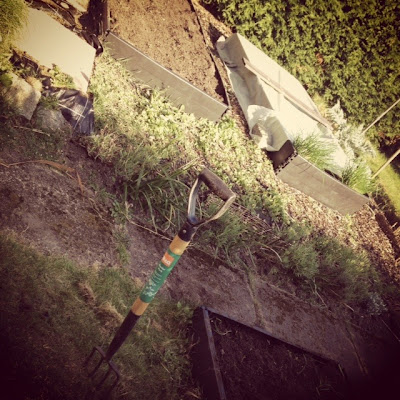 Only yesterday, that hunger triggered a three hour frenzy, digging over the green manure beds and generally preparing the veg patch for Spring. It also inspired the singular kind of madness known as talking to trees. Asking the apple buds if this year, their fourth since being planted, might just be the year, and begging them not to flower while there's still a threat of frost. 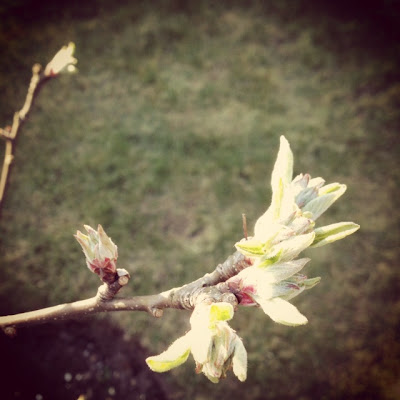 And at risk of sounding excessively crunchy, I admit to evangelising about veg patches being the best way to encourage a child's hunger for greens. The Boss, who like most of her ilk has never willingly eaten a salad leaf, has declared her sprouting micro cabbage leaves (sown on some damp kitchen roll and ready 10 days later) to be delicious. (Authoritative proof, sample size one.) 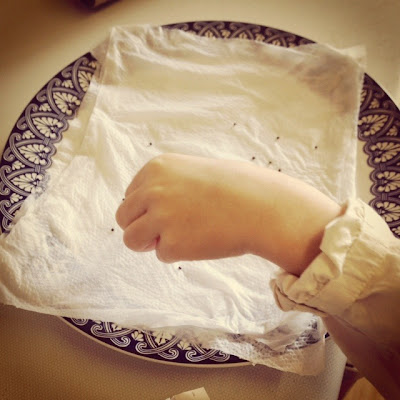 Luckily, that kind of physical exertion also makes me hungry, giving me an excuse to sit in the sun with a cup of tea and some Mothers' Day chocolates. Happy weekend!

What an amazing day. Morning coffee with my little family at a super classy little cafe (while Mr Macaroon snuck a few hours out of the office). Gardening (which mostly involved my lying on a trampoline in the sun while the girl devised obstacle courses around me) and then a picnic next to our first tulips of the year. In this part of the world, there's only one thing you can be sure of; that it won't last. So we're making the most of the sunshine while we can.


The amazing weather and sense of being home has had a rejuvenating effect in all sorts of ways, not least that I'm making something again for the first time in months. My Grandmother, who taught me how to knit as a child, turns eighty in a few days time, and this quick and rewarding Different Lines shawl is the perfect project to add to her gift basket. I'm using some Hand Maiden Casbah, which is incredibly soft and easy to work with, but I'm disappointed with my choice of colours, they're not as bright as I thought in the shop, and there's not enough contrast for the stripes. But I won't let that put me off, things always look better when they're finished, and like I said, I'm working to an important deadline. 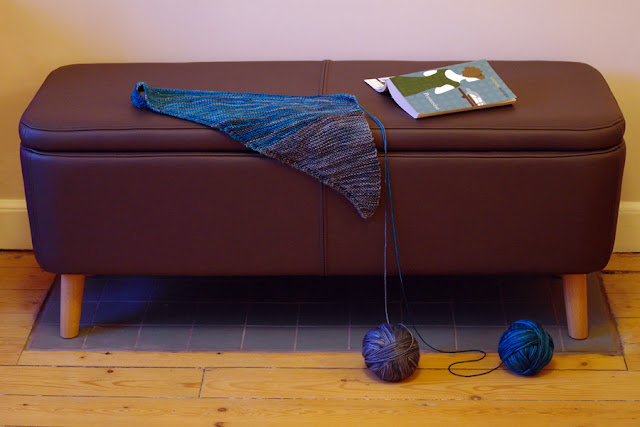 I've also got cracking (at last) on my New Year resolution, and have loved every page of Persuasion by Jane Austen. It's amazing! When I got to page 80, after five exhausting jet-lagged days staying with my (more than slightly eccentric) extended family, I empathised with Anne when she: "...admired again the sort of necessity which the family-habits seemed to produce, of every thing being to be communicated, and every thing being to be done together, however undesired and inconvenient."

I managed to fold over the corner (for future therapeutic moments) draw a deep breath, and return to the fray rejuvenated, secure in the knowledge that even Jane Austin would understand exactly how I felt!

Yarning along for the first time in months. I've sorely missed taking part which has, in no small way, helped nudge me out of the funk.

Email ThisBlogThis!Share to TwitterShare to FacebookShare to Pinterest
Labels: knitting, yarn along

getting by with unearthed treasures

Most of our belongings are rolling on the high seas. Sitting squarely on the luxurious cushion of insurance, I've been wondering how bad it would really be if the container slipped overboard somewhere in the Bay of Bengal, or was commandeered by actual pirates. (Naturally I mean friendly pirates, rather like those in the Straits of Malacca discovered by esteemed sometime anthropologist Domenica MacDonald, established resident of Scotland Street. But I digress...)

Obviously I'd need a new food processor and new plastic banana leaf curry plates (not kidding) but in the digital age, even photo albums aren't quite as priceless as they once were. I've learned that I wouldn't miss the telly or DVD player at all, and my bookshelves would groan with delight if five of the packing crates were to perish.

Oh but hang about, no, it would be awful. There remain two purely analogue parts of my life that are irreplaceable - I'd even save them from the waves before my (horrendous) wedding album - it's my recipe folders. (The eagle-eyed may notice that the plastic folders are now pluralised - streamlining fail.)

I'm rather lost without them and long to have them back in pride of place. Not because I use them every day, but because they're sort of comforting to have around when you've run out of inspiration half way through an online Sainsburys order. Instead, I'm currently reduced to about 10 recipe books; all the crappy/unused ones that were deemed unnecessary when we abandoned our house two years ago. Or so I thought...

Dom's challenge this month is to choose a recipe from the 17th book on your shelf, and for this I had to count round my diminished shelf twice, hoping against hope to avoid the bossy toddler meal planners and deluded slo-cooker evangelists. Oddly, the random book turned out not to be crap at all, the complete opposite in fact. It was Nigel Slater in an almost unrecognisable incarnation. 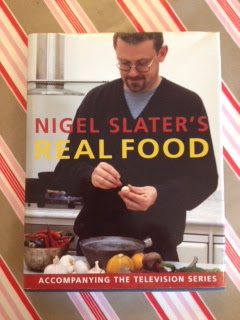 Nigel Slater's Real Food is my husband's book and, as far as I can tell, has sat on a shelf unused since 1998. I've never even thought to look at it. I can't justify that, it's just one of those unforgivable things that's happened over the years.

The random recipe selected was on page 118, Pasta with spicy sausage, basil and mustard. Unfortunately I couldn't get any spicy Italian sausages, so I used the inners of some good pork and leek instead (de-skinned and crumbled into the pan). They weren't quite right, a wee bit too sweet, but it was still really tasty, and probably suited The Boss' palate better. White wine (I used Noilly Prat just because that's what I always have to hand), fresh basil, chilli flakes, mustard, double cream, bronze die penne; you can't really argue with any of it can you? I think it has the makings of a great store-cupboard staple supper for the future. My conscience can't comfortably accept that cholesterol + carbs = a family meal, so I confess to adding a few large handfuls of frozen peas to the pasta water about four minutes before the end of the cooking time. (Sacrilege I know - just don't tell the Italian part of my family - seriously.)

I'm so glad to get back into the Random Recipe project after a few months absence, caused (in part) by the messy chaos of our lives. As well as being a signal that things might be settling down at last, it's prompted me to unearth this treasure of a book. And despite what I really think is a pretty dire cover shot (by the time the 2009 edition came out others clearly concurred) the food photography really is lip-licking.


Do head over to Belleau Kitchen at the end of the month to see what everyone else has randomly selected! 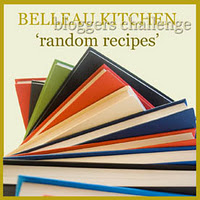 In November 2009, in the pitch dark of a Winter afternoon, my toddler and I prepared some pots in anticipation of Spring. Tiny white tulip bulbs, white daffodils and three hellebore plants. Dressed in her fleecy jumpsuit, mittens and hat, my two-year-old patted down the soil over the bulbs and coined a phrase that I will now use for ever when planting bulbs, saying that she was "tucking the flowers in to bed for the Winter". By the time Spring arrived, we were on our way to the other side of the world at the start of our tropical adventures, so we never did get to see the pot waking up.

Three Springs later, The Boss is a leggy wisecracker who has completely forgotten that lovely cold, dark afternoon, in fact she's forgotten that afternoons can be cold and dark. But on arriving home from the airport she immediately decided to go and pick me some flowers. Turns out that those hellebores (or aptly-known "Lenten roses") are the first and only flowers in the garden at the moment, so that's what she brought me. If you've ever seen them, you'll know that hellebores have beguiling eyes that you can spend ages peering into. Hence they're my subject for p52, the "eyes" of March.

Well, the time has come. We're not even close to being ready. But even my hairdresser has banished the faux sun-kissed blonde from my locks in preparation for our return to the UK, so there's no turning back now.