As holiday celebrations go, this may be a bit niche, but please indulge a big ol' heavily pregnant girl for just a few minutes.

Singapore celebrates its birthday on the 9th August every year with National Day. As an outside observer over our past few green-card-holding years, it appeared to be a display of military might (think Edinburgh Military Tattoo x 10), combined with an outpouring of National flag-waving pride (think Queenie's jubilee), and a great excuse for family gatherings that veer dangerously close to woozy schmaltz (think Hogmanay). Singapore's a young nation, with a harrowing twentieth-century history, and a hugely varied population (both in race and religion), so celebrating a common patriotism actually has a critically important role to play. National Day is wonderful.

In addition (for me at least) National Day marks the start of an endless season of festivities. One set of decorations, lights and school projects barely makes way for the next from now until next Easter: mid-autumn (lantern) festival looms, followed by the roaring arrival of the Formula 1, Deepavali, Christmas, New Year, Chinese New Year... and many more besides.

And so, thousands of miles away, in a suburban Scottish garden on a warm weekend afternoon, we tried to bring a little bit of the National Day fun home. There were lanterns, Good Morning towels and bags of kopi-O. There were little girls in cheong-sam and sarong kebaya, and little boys in merlion t-shirts. There were henna tattoos and faces painted with the Singapore flag. My hormonal nostalgia levels were cranked up to the max. But naturally, the most important element was the food (and whether my new kitchen would stand its first major test). And since nearly all the food was gleaned from the pages of some most delightful blogs, I thought I'd share some pictures and links with you here. 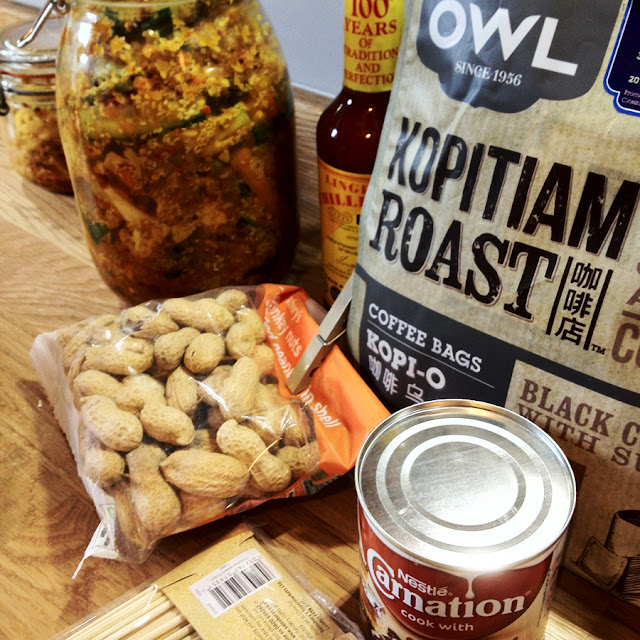 If you need to cater for 10 adults and 10 grazing kids, this menu works - I've done the test drive so that you don't have to!

Double quantities of these braised pig cheeks from North 19, using divine meat from Donald Russell online. This was an absolute triumph. I wasn't brave enough to attempt genuine cha siu bao, but if there was ever a wonderful, effortless second best, then this is it. 24 hours marinading in the fridge and then four hours in a low oven. With the gravy seeping into a white bread roll, it was simply delicious. Not authentically Singaporean perhaps, but I should've made double the double quantity. This recipe is a keeper.


And on the side? A huge double-quantity sized jar of Shu Han's Nonya achar. Now this really is Singaporean. And it was the absolute winner with the three guests who had actually lived in Singapore - proving that their spice tolerance has been well and truly recalibrated. My husband has been eating the leftovers straight from the jar since the last guests left.


On the BBQ were three times the quantity of this Singaporean satay recipe from Cheryl Lu-Lien Tan's website (author of the wonderful "Tiger in the Kitchen" - a beautiful memoir of Singaporean home cooking). Spicy and delicious and served with hacked up cucumbers and red onions.


A few sausages on the grill, salads brought by friends, platters of watermelon, BBQ pineapple skewers, and cones of Jamie Oliver's frozen mango yoghurt covered all the bases.


And once everyone had eaten their fill and gone home? We were, in true Straits style, famished! For more food, more festivals, and more Singapore. 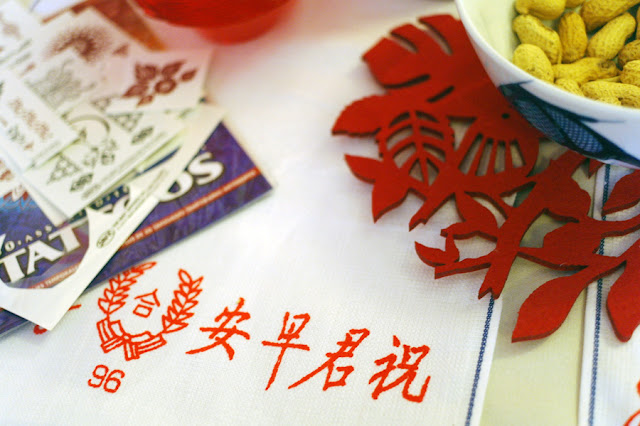 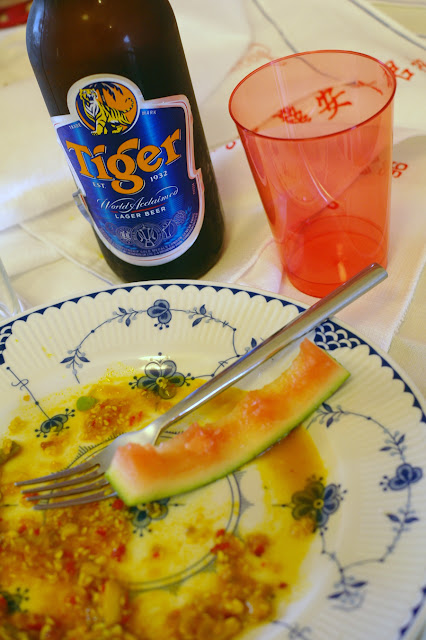